What We Do on Cold Wet Days 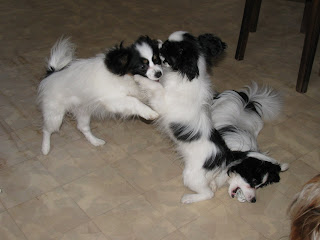 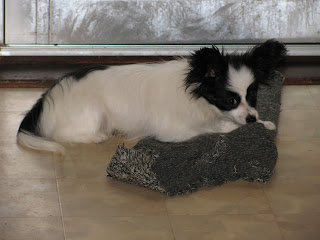 We chew the door mat. 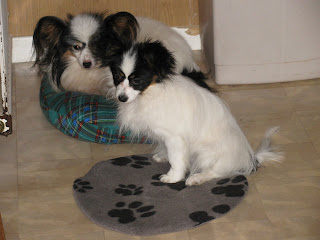 and sometimes we just sit by the radiator. 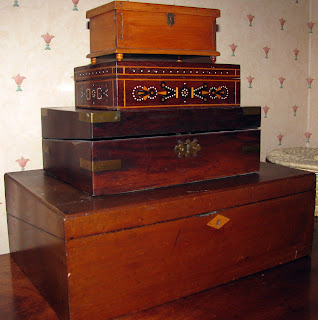 Where they sit atop the old ogee chest of drawers. 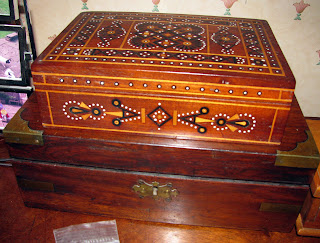 The intricate inlaid beadwork on the "Lithuanian"/Ukranian box.

This never ending spell of wintry weather has forced me spend more time indoors than normal and again I turned to clearing out. This time it was the turn of our bedroom and my "jewellery boxes" in particular. I have 4 wooden boxes, two of which are those old mahogany brass cornered writing slopes, one much bigger than the other, one small box made in 1913 by my great grandfather and the fourth box was made by someone, a Lithuanian I think, in the 1940s for my mother. He had very little in the way of tools and had asked mother for any small beads from old dresses. These he inlaid into the wood and he even made the tiny hinges. They are by no means filled with priceless gems. I have one or two slightly more valuable pieces, given when I was 21 but apart from that it is mainly things I had taken a fancy to somewhere or other.

I found several unmatched clip-on earrings and , most bizarrely, five huge molars, complete,(or rather, incomplete) with cavities, and rescued from the the dentist, the length of whose roots gives me the creeps, and guess where they ended up................................yes, wrapped in a piece of gauze, and replaced in the big box! I find it almost impossible to throw stuff out. To me it is part of my personal history. When I am gone, what will happen to all this junk? I can't imagine any of my offspring wishing to hang on to some old rotten teeth!

I also have a store of old letters from penpals, most of them now forgotten, from many corners of the world, and a couple of big nappy pins, the safety type! They too were replaced in the big box.

I did discard several buttons into the bin.

P.S. I've just been corrected by my younger brother. The "Lithuanian"was, in fact, a Ukranian.
Posted by Pyatshaw at 14:21 5 comments:

A run on the beach.

After the Limit show at Carnoustie we took the dogs over the grass and down the steps to the beach. It had been "Baltic" in the hall and only marginally better outside, but the sun was shining and the brisk wind had whipped up some waves. Charlie and Mo are not used to the sea. They are slightly more inland dogs having no accessible beach close at hand. They had a ball, whizzing round in circles and backwards and forth at top speed and rushing down to the water.
Posted by Pyatshaw at 16:48 No comments:

Jennifer's 3 are joined by my Charlie and Mo.

Charlie decides this wet stuff is not for him.

Are You a Hoarder?

I am. I suppose it was inevitable, with both my parents falling into this category. My father would go to lots of local sales, farm or otherwise, and bring home all manner of things--golf balls (he didn't play golf), gallons and gallons of paint and linseed oil, old harness, rolls of cotton cloth, and once even an ancient violin with broken strings and bow. I think he thought he had found a long lost Stradivarius! Most things went up into an upstairs part of the old farmhouse, known as the "wee stair" where it joined forces with my mother's collection, much of which were stored in the old ten gallon milk cans from the dairy, now redundant since the building of the milking parlour and the bulk milk tank. She usually recycled her stuff and could supply any child with a costume fashioned out of some old pieces of silk, velvet or otherwise when the school play called for them.
Moving house was a nightmare for us.
My most recent "collection" has been show catalogues. Some reside in the car and others are beside the phone and the computer for telephone numbers etc. but most are filed in boxes, filling cupboards and taking up most of the space under dressing tables.
Last week I decided that enough was enough and I would have a clear-out (I had no more storage space). I had got up to 2005, completely filling the recycling wheelie bin when I had a phone call. Did I keep show catalogues, championship show catalogues in particular? Could I furnish this lady with some information on the sire , dam and breeder of various dogs? Of course I could. How much of a coincidence was that? I do not know the enquirer very well and why did she phone me? I'm not one of the "big names". Another half hour and I couldn't have helped. Anyway I was glad to be of assistance and all those catalogues hadn't been kept for nothing!
Posted by Pyatshaw at 19:04 1 comment:

This was Roley's debut into the world of showing and he reacted very well, trotting round the triangle like a little trouper.
I also took the delinquent Charlie, now 8 months, and, much to my surprise, he behaved pretty well (for Charlie). He was knocked out in the first round of his class, puppies 6-12 months.
Posted by Pyatshaw at 17:31 No comments: 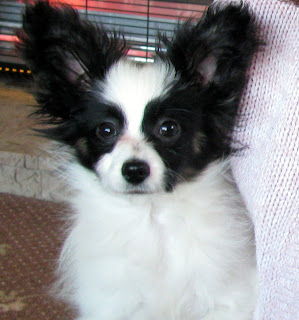 Roley, my 5 month old Papillon who won the first knock-out of the Baby Pup class but was eliminated in the second. 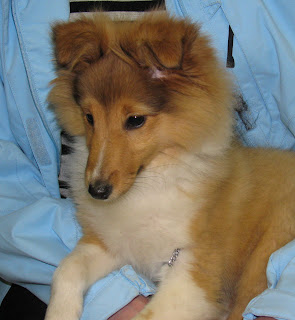 Posted by Pyatshaw at 17:27 No comments: 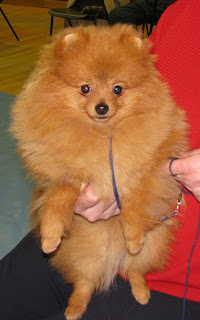 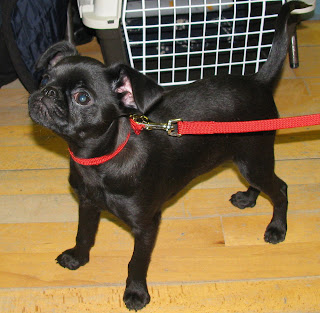 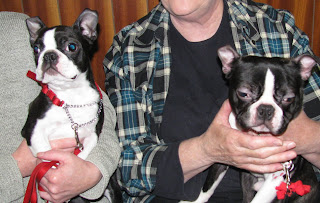 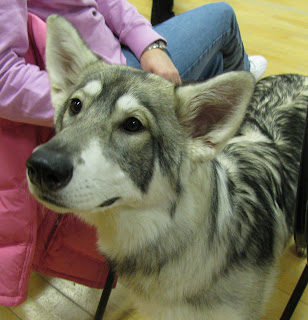 ....and an unusual one, a Northern Inuit bitch.

Posted by Pyatshaw at 17:05 No comments: 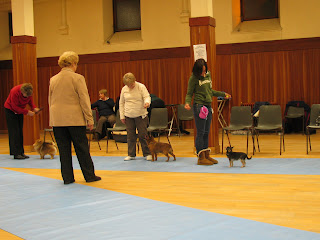 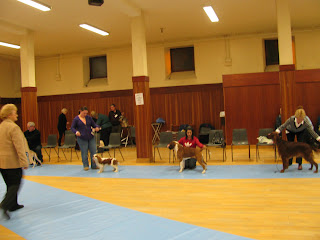 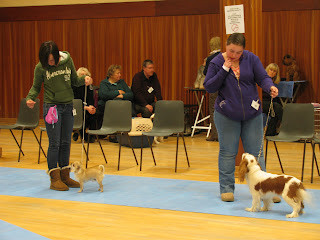 Here the Smooth Coat Chihuahua is versus a Cavalier

Posted by Pyatshaw at 17:03 No comments: 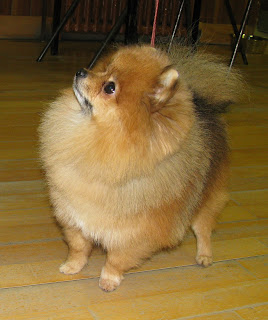 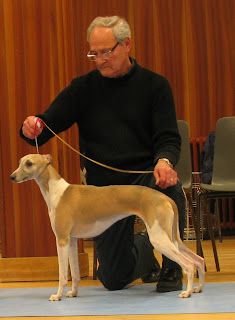 Best in Match, the Whippet 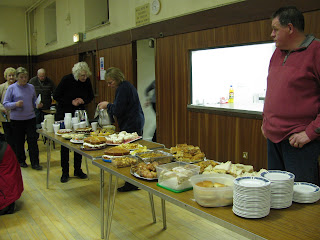 ..and the buffet supper which awaited us at the end of the Match.

How to increase your blood pressure!

I normally love dog-showing. It is my hobby and I meet my friends and their dogs there and we show, we eat and we blether. What could be more relaxing?...well, it wasn't this past weekend. I drove down to Edinburgh with five dogs, in the drizzling rain and first up I found I had to pay £3 for parking...at an Open show?...I don't remember doing that before, except for a Championship show. Then the hall had been changed but that was no great problem. In fact it saved a haul of the trolley up a hill. Inside it was warm, too warm for the several layers of clothing I had donned for this time of year and especially this particular year! However that was unavoidable since it had suddenly turned much milder and later in the day the heating was turned off.
The show started promptly with the Veteran classes: veteran dog, vintage dog followed by veteran bitch and lastly vintage bitch. Spencer was in the second class, vintage dog and Tass was to be in veteran bitch, which class followed. I explained this to our steward in the papillon ring and she said she would inform the judge. Normally judging starts in other rings on the completion of all veteran classes. Not yesterday! It started at the end of the first veteran class, which meant that I either missed the breed classes or I had someone else show some of my dogs. I do not pay my entry fee for this. I show my own dogs, if at all possible. And to make matters worse, both rings could hardly have been farther apart! It ended up with Tass and Charlie, neither of them being the easiest dogs to show, being shown by a friend. There was slight compensation when Mo went Best of Breed then on to be placed group 4.
I then started to pack up for the homeward journey. Now my trolley can take 4 cages but I dare not risk piling it any higher as the ground to the carpark can be rough, so I folded down one of the five cages and put Spencer in beside Tass for this part of the journey. So far so good! My little folding table, my folding "director's" chair, my rucksack and the extra folded down cage were secured on top and off I trundled, that is until I reached the part where I had to cross a strip of grass to reach the car. Someone, somewhere, in their wisdom, had partitioned off our part of the carpark from the tarred, access road. My trolley sank in the mud and being ever so slightly top heavy, toppled over into this gooey mess....only yards from my car. Everything was dripping with a thickish brown liquid, even some of the dogs. A couple from a nearby car ran to give some assistance and upright the cages and luckily none of the dogs is any the worse for the experience but Charlie was unusually quiet on the homeward journey! All the cage covers went into the washing machine along with other bits and bobs and the rucksack was propped near a radiator. The dry mud was brushed off this morning and even Mo had to be brushed free of the stuff along one of his sides. Now all I need to do is wash the dashboard of the car where something had brushed against it and I'll be ready for my next show next week!
Posted by Pyatshaw at 13:57 3 comments:

Pyatshaw
Farm born and raised and never really took to living in retirement in the city so moved back out to the rural scene. First introduced to papillons in the late '80s.