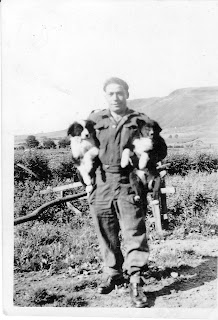 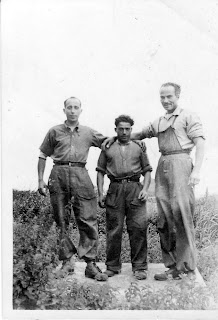 Joss with another two POWs, Frank on the left and the tall Georgies, a Scicilian, on the right. 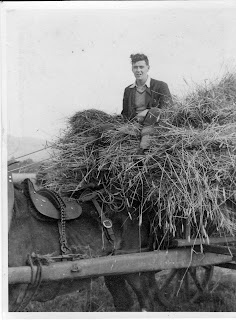 This is another photo from the same time. It is of George (Dod) Wilson, an airman, probably something to do with the aircraft which came down in the loch and mentioned in a previous post, who spent a lot of his leave at the farm, helping out. Here he is driving in the harvest with Queen , the Clydesdale. This is the same horse which "showed me how to roll a field" when I was a good bit older (as she was, by that time as well!)

Great old photos. Joss looks diddy! And what is Dod Wilson wearing on his legs? Clothing was so much more complicated in those days!

Wonderful post -- Guess I'm about your age and my dad enlisted in the "great war" but you certainly experienced it at closer hand. (I really only remember missing my "daddy" and of course not understanding why.) It is so important to keep memories like yours alive. Lovely. Thanks for sharing.

What wonderful history and memories.

You have such wonderful posts and pictures each week. I can't imagine hearing bombs go off close by much less have POWs living and working close by. Joss must have been a great person just by the warm words you write as you describe how he treated you and your brother.

Thanks for playing RW this week!

Dod Wison, in the bottom picture, is wearing breeches, a short type of johdpurs, reaching to just below the knee and worn with very thick woollen knee socks.

What great memories, even though it was war time. It sounds like Joss was a very kind family man. I think you are very fortunate to have grown up on a farm.

I was born 3 years after the war ended

I find accounts of war experiences so fascinating and admire the strength and courage of those who lived in hard times. Joss is no enemy for sure and I hope he returned safely to his family. Great post!

Pyatshaw
Farm born and raised and never really took to living in retirement in the city so moved back out to the rural scene. First introduced to papillons in the late '80s.